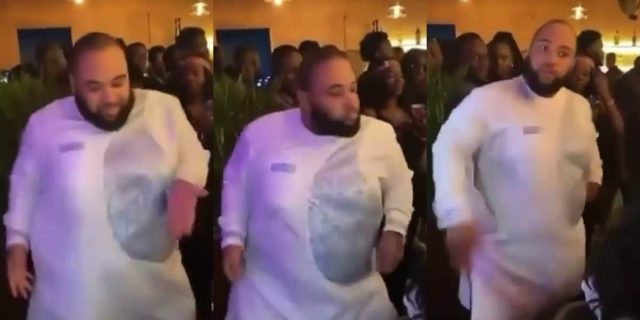 Daniel Duncan Williams, the son of Archbishop Nicholas Duncan Williams has been spotted in Bloombar having the time of his life and showing off his dance moves.

The son of the revered pastor who doubles as a musician was seen looking hyped and overly-excited as he decided to step on the dancefloor.

In a new video sighted by Daily View Gh, Dee Wills jumped onto Guru’s popular song Lapaz Toyota and we can say he really did justice to the song.

Nicholas Duncan-Williams is a Ghanaian Charismatic Pioneer, the Presiding Archbishop and General Overseer of the Action Chapel International ministry, headquartered in Accra, Ghana.

Dee Wills clothed in a beautiful Kaftan as he stepped into Bloombar to probably spend some time with his friends and take his mind off worries.

Daniel has been a pain in the flesh of his father. Over the years, he has been involved in so many scandals that brought the name of his father to disrepute.